Mass Riding...should we have it here in JB?

Been browsin' the net and came across this blog...putrajaya critical mass...it's all about a monthly mass bike ride in Putrajaya...remembered it being mentioned as one of Akmal's riding wish list.

According to the site, "Critical Mass rides are self-organized, non-commercial and non-competitive, and they operate with diffused and informal decision-making, independent of leaders. They are mostly unofficial, foregoing permits and official sanction from municipal authorities. Typically, only the meeting place, date, and time are fixed. In some cities, the route, finishing point, or attractions along the way may be planned ahead. Participants have differing purposes for the event, such as celebrating their choice of the bicycle for transportation, and enjoying car-free social time on city streets.
Critical Mass rides have been perceived aa activities. A 2006 New Yorker magazine article described Critical Mass' activity in New York City as "monthly political-protest rides", and characterized Critical Mass as a part of a social movement; and the UK e-zine Urban75, which advertises as well as publishes photographs of the Critical Mass event in London, describes this as "the monthly protest by cyclists reclaiming the streets of London." However, Critical Mass participants have insisted that these events should be viewed as "celebrations" and spontaneous gatherings, and not as protests or organized demonstrations. This stance allows Critical Mass to argue a legal position that its events can occur without advance notification of local police.
Critical Mass rides vary greatly in many respects, including frequency and number of participants. For example, many small cities have monthly Critical Mass rides with fewer than twenty riders which offer safety in numbers to cyclists in those locales, while on the opposite extreme, in what have been the largest events using the name Critical Mass, cyclists in Budapest, Hungary hold only two rides each year on 22 September (International Car Free Day) and 22 April (Earth Day). They attract tens of thousands of riders. The April 22, 2007 Budapest ride participation was generally estimated at 50,000 riders."

Kinda interesting isn't it?....sort of like the usual Tamago's twice weekly NR's...but in a much grander scale lah...and also held only once a month...maybe the only problem is to get all the JB riding groups to ride together...you see...on each Friday nights....you can spot several different riding groups in JB town area...all minding their own thing...wouldn't it be cool to unite them all in one night?one ride?

If I'm not mistaken, a group of Fixie riders called Southern Fixed had organized one on the last New Year's Eve night, but I think it was meant only for the fixie community...why not having one here involving all, be it MTB's, roadie's or fixie's?

Well...I know it's gonna be difficult to gather everybody to ride in one night...but to me..it'll be cool....hmmm...

Talking about it have me thinking...and since it has been in Akmal's wishlist...wouldn't it be great if I could make a trip to Putrajaya with him and few of our buddies? Make it as a weekend ride and throw in several others riding activities to make it really worth the trip....like...joining the PCM ride on Friday nite, then ride the Putrajaya Challenge Park (PCP) the next afternoon and finish it off with exploring Kiara or FRIM on Sunday...and while we at it, we could check out all the bike shops in Klang valley!

setan kurus
the one and only setan kurus in town! 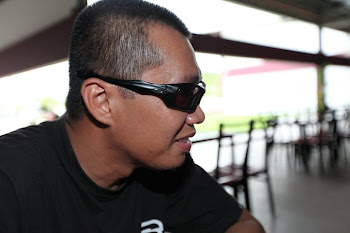